One of my fondest childhood memories is returning home after a fun game of cricket or football on a Saturday evening and curling up in bed reading a book – James Herriot or Alistair Maclean and listening to the Fauji Jayamala program on Radio Ceylon while the aroma of potato bhaji wafted in from the kitchen.  An interesting book to read, OP Nayyar regaling our soldiers with anecdotes and playing some phenomenal songs, no school the next day and masala dosa for breakfast – life could not get better!  I had recounted this in my very first blog entry and there I had used it to illustrate how aromas of food evoked distinctive childhood memories.  I glossed over the masala dosa part and I think it is time to give masala dosa its due!

I usually woke up at 6:30 am on school days but on the weekends when my mother was making poori bhaji or masala dosa, I was up at 6:00 am.  My mother soon figured out that it was better to prepare the bhaji (potato filling) the previous day so she would not have to deal with a famished son loitering around in the kitchen early in the morning asking “is it ready yet?”.  It was and still remains one of my favourite breakfast dishes.  Masala dosa to the uninitiated is a classic South Indian breakfast dish – crepes filled with a spicy potato filling.  I’ve read that Masala dosa  originated in Udupi and Aparna’s parents hail from Udupi – I guess that explains why Aparna makes a mean masala dosa!

Since I ate masala dosa at home, I rarely ate it in restaurants when I was growing up.  I was a boy scout for a couple of years when I was in school and one of our duties was to use our bamboo staves to form a cordon to keep enthusiastic schoolmates at bay during the prize distribution ceremony of our hockey tournament(presuming our school qualified for the finals, which it invariably did).  We had a pretty good hockey team and we usually won the juniors and seniors and so there were quite a few disgruntled kids from the opposing school who took their frustrations out on us trying to shove us and pull our scarves.  The reward for our labour (in addition to a holiday the next day if we won both the juniors and seniors) was a coupon for Shanbhag on Residency Road.  So a hungry, ragged group of scouts would feast on masala dosa at Shanbhag.

As I grew up and went to engineering college in Mysore, masala dosas started to reflect the state of my finances.  The beginning of the month when I was flush with cash, I would eat at Gayatri Tiffin Room (GTR) in Chamundipuram.  GTR was famous for its masala dosas and their absolutely delicious masala dosa set me back by Rs 3.50.  You could watch their cooks prepare the dosa on these large griddles.  Each cook would dip a broom in bucket containing oil and spatter a liberal dose on the hot griddle.  He would then dip a bowl in a large vessel containing the batter and with practiced hands spread the batter into a perfect circle.  As the masala dosa cooked, he would throw in a scoop of the potato bhaji, fold the dosa over twice and then place it on a plate lined with a banana leaf.  The dosa would then be served with chutney and sambhar.  As the month progressed, I would find myself eating masala dosa at Meenakshi Bhavan.  Their masala dosa was more modest and it set me back by Rs 2.50.  The end of the month, found me at an outhouse near Ballal Circle where a lady sold masala dosas from her home for Rs 1.  If my finances were really bad, I would end up just buying the bhaji (potato filling) from Meenakshi Bhavan for 50 paise and then make grilled sandwiches at home!  During the severe onion shortage of the late eighties, restaurateurs were hard pressed and faced with the choice of either raising the price of masala dosas (onions are an integral part of the potato bhaji) or to find alternatives.  Some did raise their prices but many others substituted the onions with cabbage – cut to resemble onions!

Surprisingly enough, I’ve not eaten masala dosa at the two landmark restaurants in Bangalore – Mavalli Tiffin Room (MTR) located on Lal Bagh Road and Vidyarthi Bhavan in Gandhi Bazar.   The latter is considered to have one of the best masala dosas in Bangalore.  Aparna has eaten at Vidyarthi Bhavan and she says the reputation is well earned.  She remembers it as a small, unpretentious joint that served amazing masala dosas.  She says the line snaking out of the door was a testament to their quality and taste.  Just search for “Vidyarthi Bhavan” online and the number of hits seems to indicate that it is still going strong!  Tastes are usually subjective and in my case, I think my memories also serve to influence my choices.  My uncle loved to eat masala dosa at Planters Coffee Home in Malleswaram and I got to eat there with him during one of his last trips to Bangalore.  Their dosas were thicker than the ones that were served elsewhere but the sentimental memory of eating there with my favourite uncle transforms it to a different plane.  Sometimes, the masala dosa was not even a traditional masala dosa.  My mother’s aunt lived off of M.G. Road and I would drop in there occasionally after school.  She always had a stock of potato bhaji in her fridge and she would use the dosa batter of the day to serve up a couple of hot masala dosas.  Purists would scoff at those dosas but to me they were masala dosas nevertheless!  Speaking of aunts, my aunt’s (mom’s sister) masala dosa was acknowledged to be the best in our family.  Her secret was the butter she used in lieu of oil.  This leads us to the variations of masala dosa. 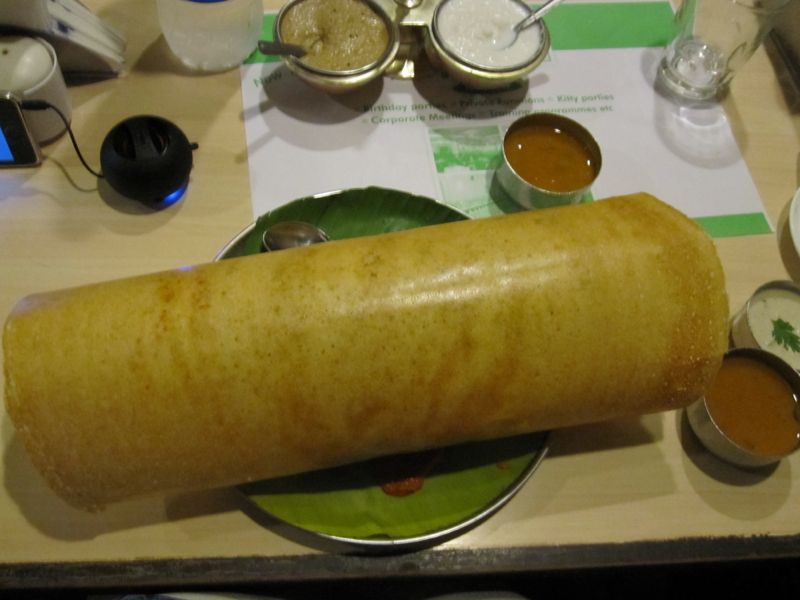 Masala dosas by nature can be fairly greasy, but “benne masala” (benne is butter in Kannada) is  something else!  Your doctor would frown at the amount of butter used but I guess its fine to indulge once in a while.  Our current favourite is the Butter Masala at Central Tiffin Room popularly known as CTR on Margosa Road in Malleswaram.  The last few times I’ve been to Bangalore, it has a been a tradition for me to eat there with my father.  A “benne masala” followed by coffee is a taste of heaven!  Minerva Coffee House in Hyderabad is also a favourite when we visit Aparna’s parents in Hyderabad.  Then there are the paper dosas – paper thin masala dosas, formed by spreading the batter so the resulting dosa is as thin as paper.  The dosa usually extends out on both sides of the plate.  I heard legends of the  aeroplane dosa when I was a small boy in Bangalore.  It was apparently served by two waiters, the dosa spreading across two plates and usually eaten by an entire family!  We love our movies and this is borne out by another name for this colossal dosa – “70 mm dosa” reflecting the size of the movie screen.   Some restaurants apply a layer of spicy red chutney on the dosa before spreading the bhaji on the dosa.  The dosa is traditionally presented lengthwise with the edges tucked in, but variations involve serving the dosa as a triangle or a cone.  I like to eat my dosas with the potato filling on the dosa, our daughter likes to eat them with the bhaji on the side.  Either way, we agree that they taste delicious all the same!

There is one memory that stands out in my mind.  When our neighbours were building their house, they had hired an old man to serve as a watchman.  His duties involved staying in a small brick shed next to the house being constructed and keep an eye on the construction materials.  Bangalore could get pretty cold in those days and I remember one Sunday morning, my mother handed me a plate with a couple of piping hot masala dosas with chutney on the side and cup of hot coffee and asked me to hand it to the watchman.  I was probably in my 8th grade and the look of gratitude and joy on the old man’s face is still fresh in my mind.  He joined his hands together in gratitude as I handed him the plate.  I used to take my food for granted and actually had the gall to complain to my mother that I was getting tired of her idlis and dosas and that she should conjure up something else more interesting.  The masala dosa that the old watchman ate that day was no doubt delicious but I think the simple, kind gesture of my mother made it all the more memorable for him and for me.  The old watchman has passed on and so has my mother, but the memory lingers on.  I hope my children have fond memories of their childhood and one of them involves the aroma of Aparna’s masala dosas wafting out of the kitchen! 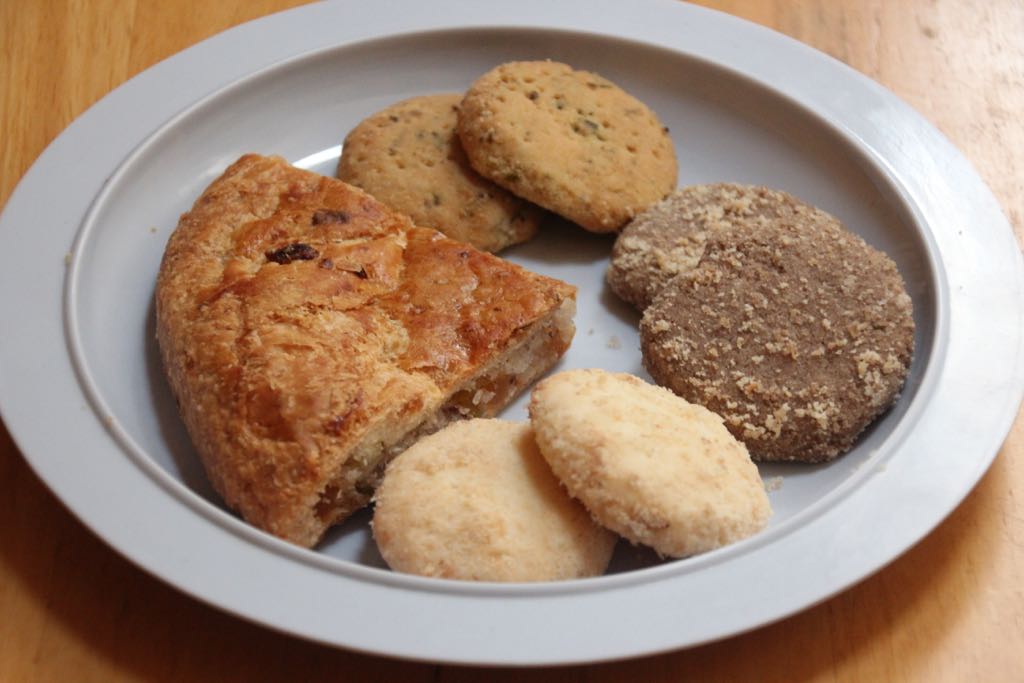