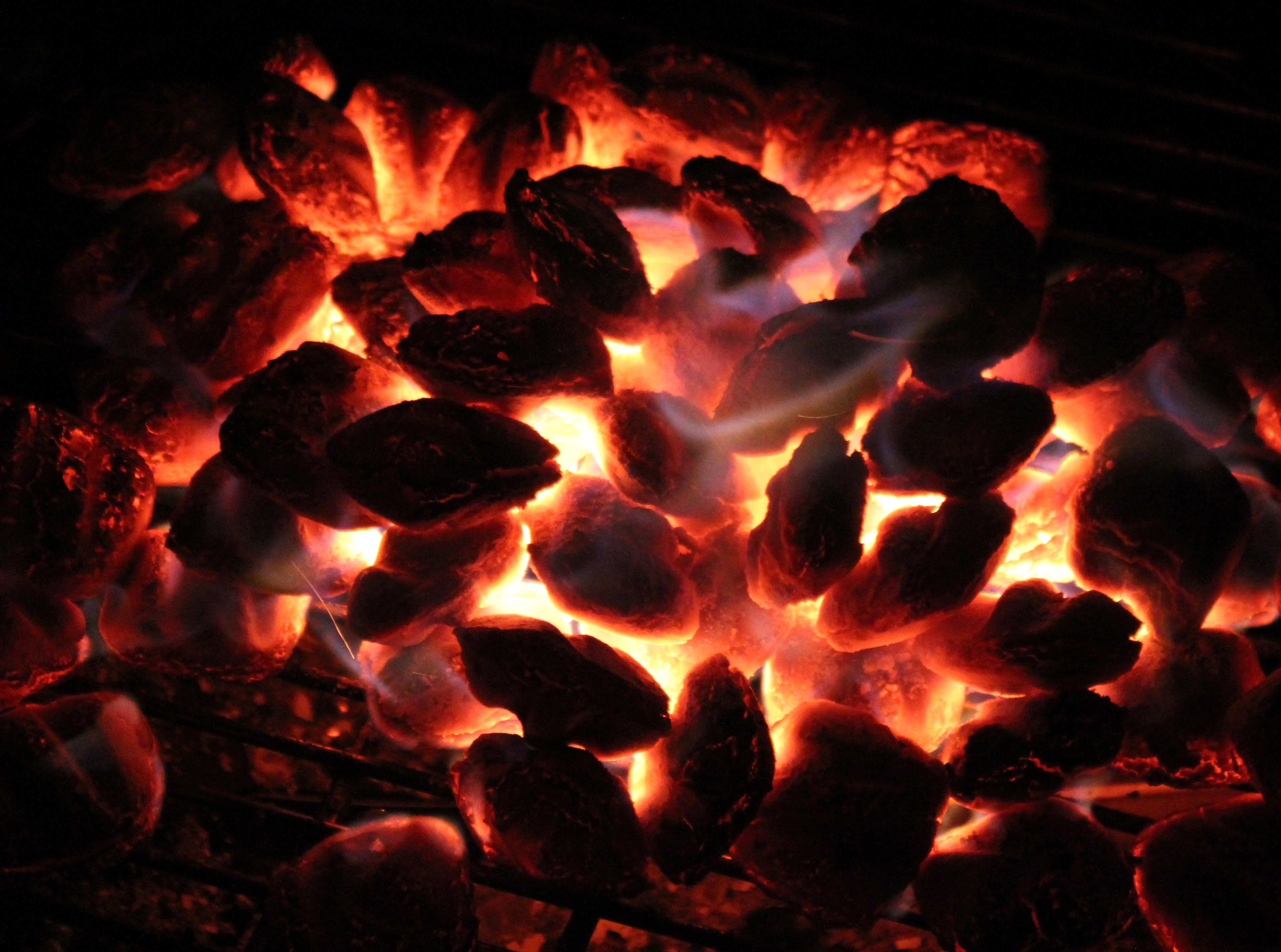 It’s summer, Memorial Day has passed and it is the official start of the grilling season!  Temperatures have nudged their way upto the nineties  and neighbourhood grills are awakening after lying dormant for the winter!

Grilling was one thing we never did at home while growing up in India.  My mother had a circular oven, I think it was made by Bajaj and while it worked great for cakes, we never really used it for grilling.  My mother did try a version of Tandoori chicken  once but the result was not quite what we expected.  In retrospect, I think the problem was that we were placing the meat with the marinade in a plate and baking it in the oven.  The juices of the chicken stayed in the plate and the finished product was not quite dry and the marinade still had a raw taste.  If we had placed the chicken on a grill over the plate so the juices could drip down, I think the results would have been better.  Nevertheless, after that solitary attempt, my mother never tried grilling again. 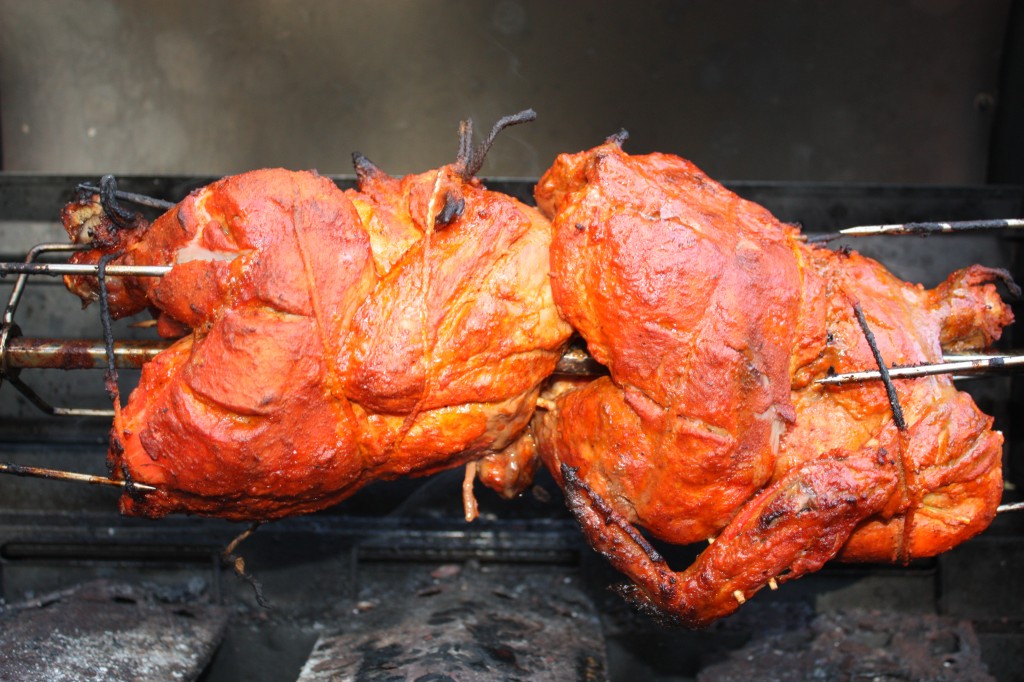 My first grill was a portable gas grill.  The kind one would use while going camping.  The results were reasonable, but the meat would invariably dry out.  I then bought one of those portable coal grills.  Aparna and I called it “Aryabhatta” since it reminded us of India’s first satellite.  I then went through a series of grills – gas and charcoal until this spring when I finally bought a Weber charcoal grill.  I had never bought a Weber grill since they were always more expensive than the other brands and I could not bring myself around to spring the extra money.   I finally gave in and I’ve never been happier.  I’ve always loved coal grills for the slow cooking and the smoky flavor they impart to food.  The folks at Weber really know what they are doing and the results are fantastic.  The shape of the grill and its design allows for convection cooking much like tandoors and this results in moist, succulent meat.

My previous complaints with coal grills were that it took a long time to prepare the grill.  I would end up using instant briquets that would light up easily but had to burn for a while to remove the chemicals.  I then came across the Weber chimney starter and this device is ingenious. I can now have a roaring fire in about 15 minutes, I don’t need lighter fluids or instant briquets and the regular briquets are cheaper than the instant ones.  This accessory is worth every cent. 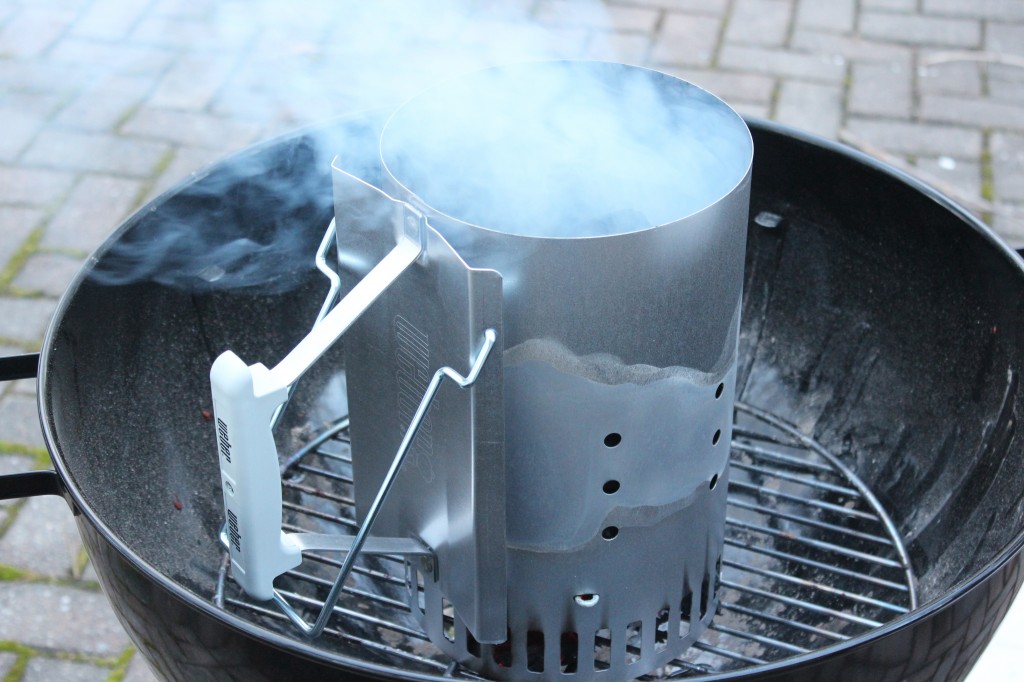 While recreational grilling is for the common man in the US or Australia and is almost a tradition,  it is rare that people grill food over a coal or gas grill in India (I am not taking into account, people at the lower end of the economic strata who use coal or firewood for cooking).  I guess there is no need to do this when one can order Tandoori specialities from restaurants and dhabas.  There are certain sections in any Indian city or town, usually in areas that are predominantly Muslim, to find vendors grilling kababs over charcoal grills or sigdis at night.  Walking through these streets on a chilly evening with the aroma of chicken and mutton seekh kababs grilling over embers of coal is a delightful experience. 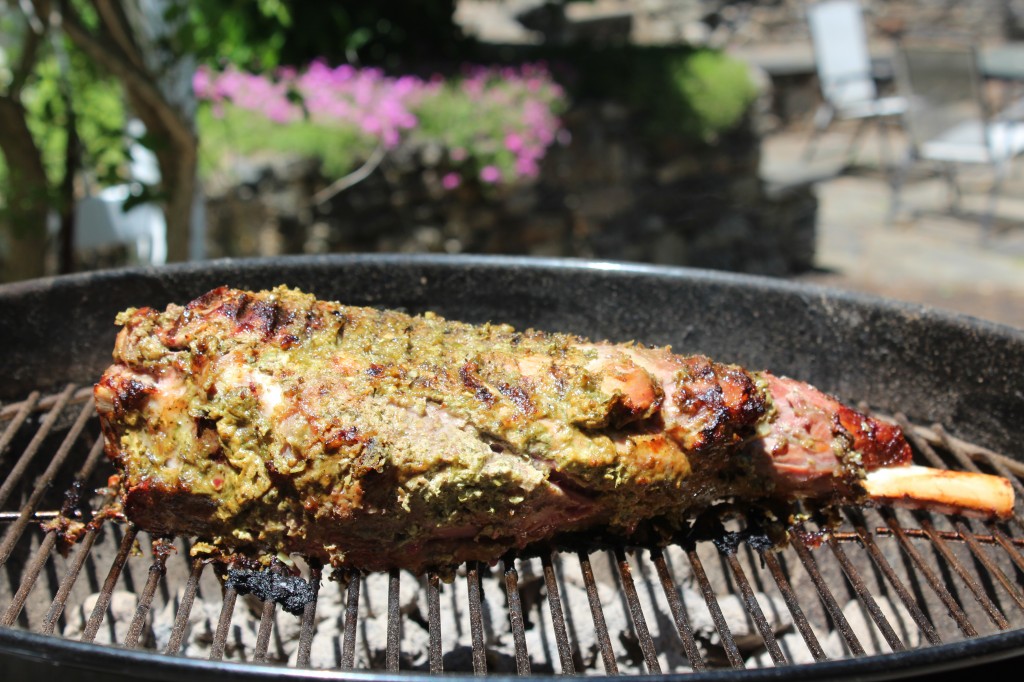 The fact that most well to do Indians do not grill their own food has opened up a niche for “Barebeque Nation” a chain of upscale restaurants that allow their patrons to finish up grilling small cuts of meat on hibachi like table top grills.  Being India, there are vegetable and paneer choices for vegetarians.  Given the price, this is really for the well heeled customer and not exactly for the common man.  Aparna’s brother treated us to lunch during one of our visits home.  The food was good and I can see the attraction for patrons who can experience grilling for themselves, albeit in a controlled environment.

The grill of choice in India is a Tandoor.  It is a clay oven that is wood or coal fired and attains high temperatures.    Tandoors and kababs were probably introduced into India by Persians and as such they are much more common in North India than in South India.   Breads such as Naans and Tandoori roti are cooked by slapping rolled pieces of dough on the inner walls of the oven while meat is threaded on long skewers and is cooked by the convective heat in the oven.  I had dabbled with the idea of constructing a Tandoor at home and looked up designs on the web.  I soon realized that it would take a fairly long time to heat up a Tandoor and given the quantity of food that we cooked, it would be a waste.  Rotisseries have made their way into India and it is not uncommon now to find Tandoori chicken cooked in gas fired rotisseries. 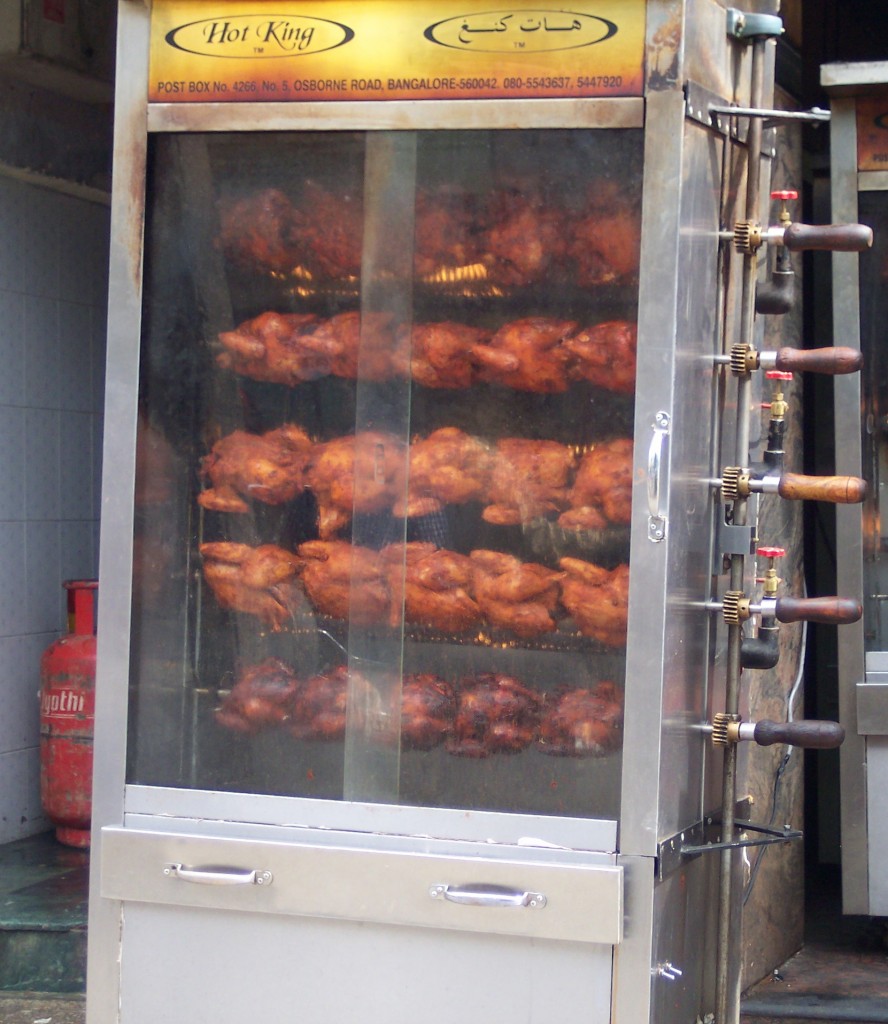 While it is common to find books aplenty on grilling in the West, there are not a whole lot of books on grilling in India.  However, “Tandoor: The Great Indian Barbeque” by Ranjit Rai is an excellent treatise on all things Tandoori.  He starts off with a history of the Tandoor, describes the construction process, techniques for seasoning the Tandoor and finally provides a number of recipes.  Rai also provides two possible roots for the word Tandoor, one from Pushto and the other from Sanskrit, leading him to surmise that some form of the tandoor existed in India prior to the advent of the Persians. 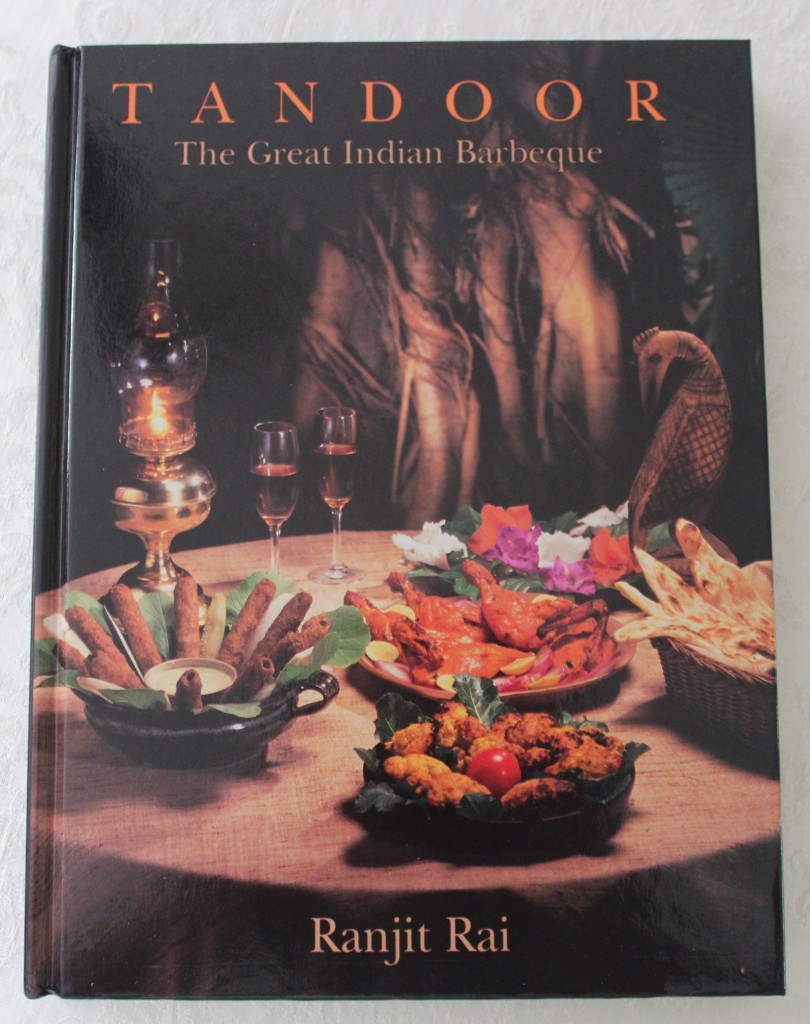 Aparna and I’ve spent many delightful evenings, grilling Tandoori chicken, tikkas, boti kababs and seekh kababs.  Over the course of this summer, I plan to post some of these recipes.

Grilling requires patience, one cannot hurry through the process and by its very nature, allows us to sit back and converse while we can hear the coal crackling, feel the warmth of the grill and smell the delicious aromas as the drippings smoulder on the coal.   In this hurried world where everybody is in a rush and we “nuke” our food in the microwave, grilling is a throwback to more relaxed times.  Perhaps this is the lure of the grill.  If one of our ancestors happened to time travel, he would find our world unrecognizable, but I’m sure his eyes would light up and his mouth water as he saw us congregate around a fire grilling chunks of meat!