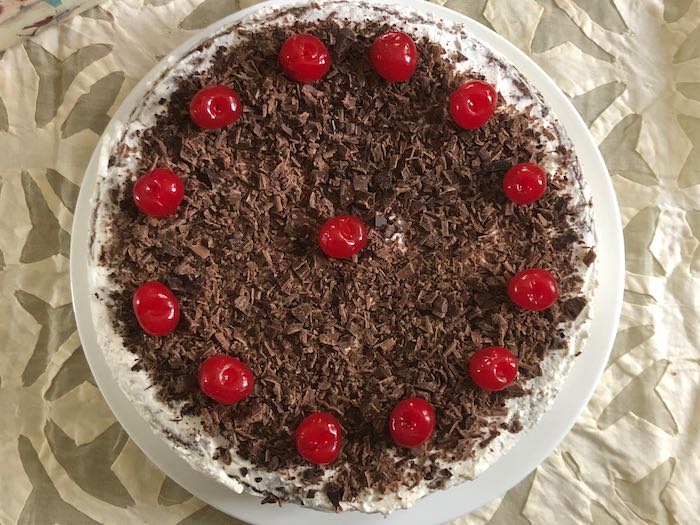 Black Forest cake was my favorite when I was growing up in Bangalore. Sweet Chariot on Brigade Road was known for their delectable cakes, especially their Black Forest. It was delicious but looked formidable. I had cooked through my 4 years of engineering but had never baked a cake, though I had helped my mother with her baking activities. In 1991, a month before I left for the US, Deccan Herald, the local newspaper featured a recipe for a Black Forest cake. It involved condensed milk and a Cola drink and it intrigued me.

My brother was newly married, my mother, the expert baker, was out of town and so my sister-in-law and I, both amateur bakers at best, gave the recipe a shot. I used a bottle of Thums Up and a can of condensed milk. The recipe is in fact from Milkmaid, Nestle’s brand of condensed milk in India. The result was delicious. Over the years, my memory embellished the cake until it became a legend of sorts that I would narrate to my wife and daughter. Earlier this year, Aparna returned from a trip to India along with a yellowed clipping of the recipe. My sister-in-law had thoughtfully saved the recipe and she sent it along with Aparna. I decided to bake it today for Mother’s Day. This recipe does not involve eggs and as such I think it would be useful for vegetarians. I must add that this is not my recipe, it is Nestle’s recipe.

Grease the baking container (I used a springform cake pan) and dust it with flour.

Melt the butter in a microwave-safe bowl and let it cool down to room temperature.

Add the condensed milk and mix well (Use a large bowl since you will be adding the flour and other ingredients to this mixture).

Mix the flour, cocoa, baking powder and bicarbonate of soda. (The original recipe asks for sifting the flour, but most flour that is available today is pre-sifted).

Pour the mixture immediately into the baking container and bake in the oven for about 35 to 40 minutes until the cake is done.

Let the cake cool down and then slice it horizontally. (A floss string works well to slice the cake).

Whip cream till light and fluffy. I used a stand mixer to do this. Cool Whip could be used as an alternative.

Apply the cream to the surface of one half and then place a few cherries on the surface.

Place the other half on top and then apply cream to the surface and sides.

Cover the top with chocolate shavings and decorate with the remaining cherries.

Chill in the refrigerator prior to serving.